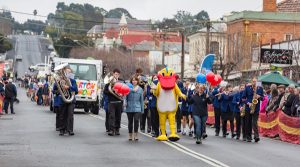 Canine enthusiasts of all ages filled the streets of Casterton at the weekend’s annual Kelpie Muster.

Thousands of visitors, from across the nation and even the globe, packed up their cars to the small town, the birthplace of the Kelpie, to watch a mix of novelty and serious events.

Saturday is regarded as the dog loving day that shows the agility and talent of the working dogs in events including the dash, high jump and stockman’s challenge.

Sunday is the more serious day and has garnered a strong reputation as an elite event for the best working dogs and trainers.

And with 57 dogs auctioned, an 86 per cent clearance rate and full earnings of $211,650, Casterton Kelpie Association president, Karen Stephens labelled the event as a huge success.

“They certainly don’t call it Australia’s premier working dog auction for nothing,” she said.

This year, the top dog, Dotti, was trained by Melville Forest’s Jack Leonard, fetching a price of $12,000.

“The conversation between the breeders was that this was the dog, this is the one for this year and for Jack to win, that’s a huge accolade. He was very excited but a little overwhelmed I think to take out the title among such a strong competitive field.

“In fact, it was an enormous week for Jack, with he and his wife also welcoming their first child,” Ms Stephens said.

Ms Stephens said dogs sold at the auction were distributed to all corners of the country.

“It is really heart rendering stuff to see grown men crying to hand their kelpies over,” she said.

Although the auction on Sunday exceeded expectations, the free events on Saturday also attracted much interest.

We had fabulous weather and fabulous crowds,” she said.

Everyone just gets so excited on Saturday… it’s such a joyous day. It’s wonderful to just look at the visitors faces and to see their excitement and joy.

“I have met people from all corners of Australia this weekend and even overseas with a lovely couple coming all the way from Japan specifically to come to the Festival,” Ms Stephens said.

Ms Stephens said a highlight was the kelpie high jump with Tegan Eagle and her dog Bailey taking out the honours for the third year in a row, putting them in the association’s Hall of Fame.

Other winners included Matt Haines and his dog Finn who were crowned King of the Kelpies Triathlon, and the quickest in the 50 metre dash in 5.03 seconds. Rider Tom McMahon won the Stockman’s Challenge while Tricia Carter and Jet took out the working dog futurity.

The two-day event has also been seen as an economic win for the town with shops, hotels and accommodation providers doing a busy trade.

“The muster is a big thing for the town,” she said.

“Everyone puts in that extra bit of effort volunteering. It’s fantastic that the association has the support of the volunteers and that we can offer the opportunity to these groups to make it their main fundraiser.

“We couldn’t run the event without them, it’s all those things behind the scenes that happen to make the weekend run smoothly.”

Casterton Kelpie Festival chairman Brian Burns said the weekend was “unbelievable” from the support of the town, the volunteers and business to the visitors that come.

“On Saturday I met a couple that travelled all the way from Perth to enter their dog in the dash. I also met another group of 30 or so campers from Portland who were staying for the week,” he said.

“Thanks must go to the whole committee and to the volunteers who put on such a remarkable effort to put on such an event that doesn’t cost anything to go.”